Cultural resources are defined as the collective evidence of the past activities and accomplishments of people. Buildings, objects, features, locations, and structures with scientific, historic, and cultural value are all examples of cultural resources.

Cultural Resource Surveys are intended to evaluate, inventory, and document properties to determine their significance within the cultural and historic context of the subject area. A typical survey generally involves the preparation of a Context Statement (a Statement of Significance) and the documentation of properties on California Department of Parks forms (DPR 523 forms). This documentation and evaluation may lead to identifying local, state or national register eligible resources and/or historic districts.

The San Francisco Redevelopment Agency, working as part of the city's Central Market Partnership in an effort to revitalize the Mid-Market area, initiated the process of creating a Mid-Market Redevelopment Plan. We were hired as a subcontractor to ESA to complete the historic survey portion of an Environmental Impact Review (EIR). We consolidated documentation from previous surveys and updated that information where appropriate. In addition, we surveyed and documented 196 individual properties and created a context statement documenting the cultural and physical history of this stretch of Market Street.

Click here to view a pdf of the draft survey.

Working for the San Francisco Redevelopment Agency, we undertook a four phase survey. During the first phase (2009-2010), we conducted archival research as well as personal interviews to create a historical and cultural context statement for the Bayview-Hunters Pint neighborhoods, which was adopted by the Historic Preservation Commission in March 2010. We also surveyed and documented over 700 properties using DPR 523 A (Primary) forms. During the second and third phases (2010-2011), we updated the context statement and documented an additional 800 properties. Phase four will be completed in 2012 and will involve documenting a final 1050 properties. 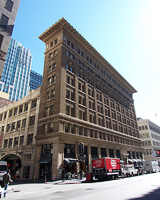 We were hired by the City and County of San Francisco to undertake the survey as part of the preliminary planning for the proposed new Transbay Joint Powers Authority/Caltrain Transbay Transit Center Project at 1st and Mission streets. The survey area encompasses 260 commercial and industrial properties in the northeastern part of the South of Market District, the former center of the City's historic wholesale district and presently the southern extension of the Central Business District.

In addition to preparing a historic context statement and DPR 523 A (Primary) forms for every property within the survey area, we identified and documented a California Register-eligible historic district centered on Mission and New Montgomery streets encompassing 86 contributing buildings, most of which are intact masonry commercial loft buildings erected between 1906 and 1930. We also prepared DPR 523 B (Building, Structure & Object) forms for outlying buildings outside the proposed district boundaries. 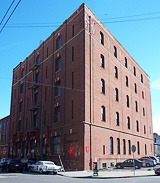 Working again for the City and County of San Francisco, we conducted the survey as part of ongoing planning activity in the area under the aegis of the Eastern Neighborhoods Program. The survey area includes sections of the Northeast Mission and northern Potrero/Showplace Square planning areas encompassing roughly 600 industrial and commercial properties, most of which were constructed between 1893 and 1955.

Several projects have required us to perform small scale surveys of the area surrounding the project site. Due to our proprietary databases and use of digital technology, we are equipped to complete projects like this quickly and affordably.